it's kinda dumb but fanfic archival is really important to me. fanfiction's often overlooked because it's not "real writing" (which is bullshit by the way) that gets published into books and everything, or that it "copies people's original work" (when really it's transformative work that builds off of existing work), but fanfiction is writing just like anything else, and its nature being transformative work makes it a high risk for deletion. in the early 2000s, a lot of fanfiction was taken down due to writers receiving cease and desist letters by the copyright holders of the work the fanfic is based off of. that very rarely happens now, but there are many other reasons why fanfiction gets deleted so easily: host websites for fic shutting down/banning certain types of fic (such as quizilla's downward spiral and eventual shutdown and the fanfiction.net nc-17 purges), sudden purges of work by an author, and more.

to summarize it, fanfiction being transformative work based off of existing work based primarily on the internet puts it at high risk for deletion for multiple reasons. because of work by the organization for transformative works, an organization formed by fans in 2007 in order to preserve fannish history and work as well as provide sanctuary for fanfiction and at-risk fannish projects/archives, fanfiction is much safer than it used to be in the early 2000s. however, even though the archive of our own exists and hosts most fanfic published online today, not all fanfiction is preserved there. fanfiction.net, despite past purges and general mistreatment of fans, is still a popular option for fanfiction, and old fanfiction can still be found on self-hosted and fandom specific archives online that may be more difficult to find in recent years (such as older fansites like little miss kinomoto, a cardcaptor sakura fansite that hosts series-related fanfiction). fanfiction can also be found on former homes for fandom like livejournal, or on sites like tumblr where fanfiction that gets posted there is easily lost in most blogs where it is tagged insufficiently or unsearchable.

while not all fanfic can be preserved from every single website since there's too much, the most an individual person can do is simply preserve what you read from your fandom(s) on sites where fanfiction is posted. for example, my main fandoms are ao no exorcist and boku no hero academia. i read a LOT of fanfiction for these, and while most of it is from AO3 (acronym for the archive of our own) and FF.net (acronym for fanfiction.net), a lot of it can be found on sites like tumblr and livejournal (i've only come across ao no exorcist fanfiction on the latter, but i'm sure boku no hero academia fanfiction exists on there too that i haven't found). every fanfic i read from these fandoms, i download and save in organized folders on my computer. in the event any fic is taken down or removed from its host site for any reason, i have a copy of it for my own personal reading.

i have all my downloaded fics organized into various folders. the first two are simply "mine" and "not mine". "mine" has all of my own fics, and "not mine" has ones i've downloaded and read from online. both folders have fics sorted by fandom. for example: 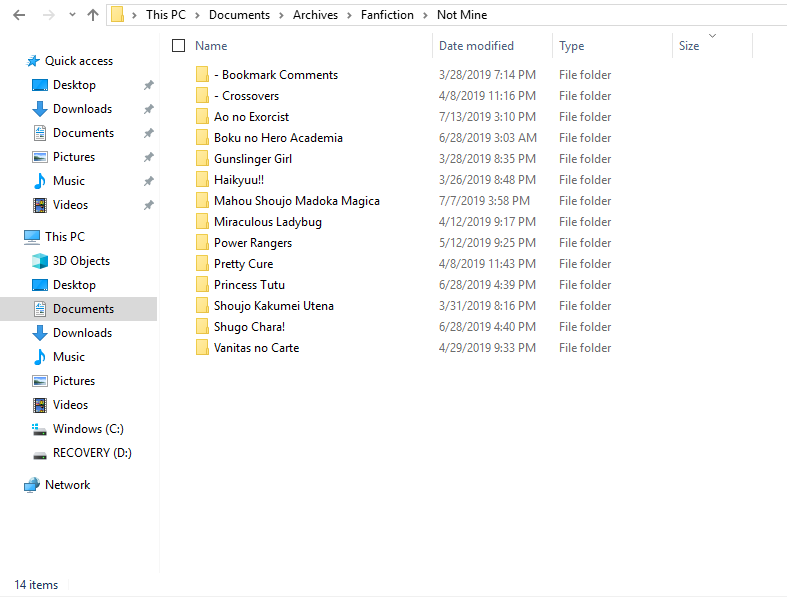 if you're wondering, by the way, the bookmark comments folder is for .txt files that have comments i've left on fic bookmarks on AO3 (storing those is optional since that's a personal thing, i just store them since i want to preserve what i've written about various fics). the crossovers folder is for...well, crossover fics. each crossover fic is stored in its own folder that's titled with each fandom in the crossover. it's definitely not an efficient way of storing, but i plan on changing it soon.


my method of saving may be more complicated than how others do it, but if you want to archive fics, do what works for you, not other people's methods (yes, that goes for mine too when i explain how i do it). the only external programs i use for archival are fanfictiondownloader (for downloading from fanfiction.net) and libreoffice writer (to copy and paste fics from sites other than AO3 and FF.net into their own documents to add various information from the fic likes dates and author info). i download all fic in pdf format, even though epub is the preferred format for most, since....well, i just prefer reading pdfs instead. using either format is up to you, though, since both are open and non-proprietary formats. stick to formats like those, since it means they'll be supported almost universally.