back when my sister and i were around 4-6 years old, we had this pink barbie tv in our room. it was a crt style tv, one of those marketed for kids because regular crts looked all boring and gross. we got the tv as a gift from our grandmother when we were really young, so this was before it stopped working, but when it was working, we loved that thing. we watched everything on it, even if the picture was horrendous and each year made the pink tv turn yellow even more. i can't get a picture of the tv since it's buried deep in my closet and it's all gross and disgusting, but here's a picture i found online: 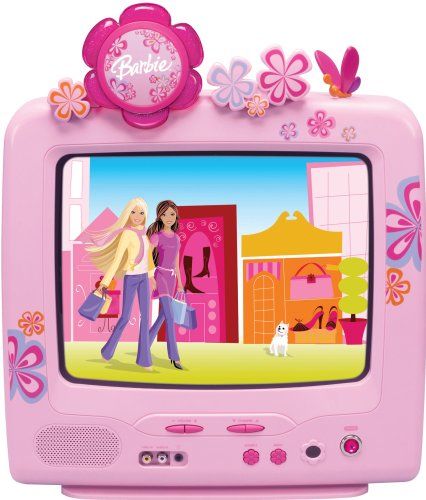 anyway, we used to watch a lot of stuff on it, including various dvds since it came with a barbie-branded dvd player as well (which i can't find a picture of unfortunately). but when we were about to go to bed, we were TERRIFED of the dark, so my mom would put on a certain dvd to help us fall asleep. that dvd was tom and jerry: the magic ring. it's a direct-to-video tom and jerry movie (which means it's garbage) that came out in 2002. my mom doesn't remember how she got it, but since there was a blockbuster near us that we went to a lot, it was probably bought from there. anyway, when we were going to bed, she would put on that movie. the problem: she never changed it.

we watched this fucking movie EVERY night to fall asleep, and we never told our mom for some reason, but it annoyed us SO much. my sister and i have this movie ingrained in our brains, every second of it. every agonizing second. the movie is horrible too! i mean, i shouldn't expect much from a direct-to-video 2002 cartoon movie, but it's so bad even i knew it when i was like, 5!

my sister and i watched it every night for like 2-3 years. i don't remember how we stopped watching it, maybe we finally switched it out to something else, but i'll forever remember falling asleep to that movie, annoyed by jerry with the damn ring on his head and tom being an idiot.

oh and if anyone's wondering, our mom said she didn't know how bad it bothered us, and she feels guilty about playing it so much lmao (we've forgiven her though, it's just a funny thing from our childhood)